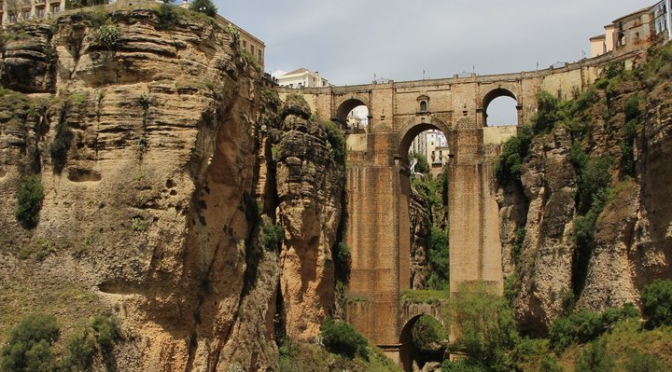 If you are planning to visit Marbella this year, why not take a day trip to some of the most stunning towns and cities nearby?

Marbella properties for sale offer excellent rental potential and are within easy reach of Andalucia’s most beautiful towns and villages.

Just an hour away by car, Ronda is famous for its spectacular 100 metre deep gorge, El Tajo. The town is split between the old Moorish part and El Mercadillo, a more recently built section, linked by the Puente Nuevo, new bridge, which was built in 1751, and took 42 years to complete.  Boasting the oldest bullring in Spain, which is open to the public, some of the best tapas bars in Andalucia, and a stunning parador which seems to cling to the side of the gorge, Ronda is a must-see town if you are staying in Marbella.

One of Andalucia´s most important and traditional events is the Feria Goyesca de Pedro Romero, held in Ronda each year in September. The celebrations take place in and around the Real Maestranza Bullring. The Goyesca tradition began in 1954 when Antonio Ordóñez, a great friend of Ernest Hemingway, and also a great bullfighter, decided to celebrate the birth of Pedro Romero, the founder of modern bullfighting.

Marbella properties for sale are within easy reach of some of the most famous white towns of Andalucia.

The famous rock of Gibraltar is also an hour’s drive from Marbella.

Gibraltar´s history evolves from its strategic position at the southern-most tip of the Iberian peninsula, where Europe meets Africa, and is still an important base for the British Navy.  The territory shares a border with Spain to the North.  Gibraltar was granted by Spain to Great Britain in perpetuity in 1713, under the Treaty of Utrecht, and although Spain insists it should be returned to them, it remains British territory. The British Government has vowed to respect the wishes of the Gibraltarians, who oppose any proposals for shared sovereignty with Spain.

The rock is home to many historical sites and places of interest. Tourism boosts the economy and many cruise ships dock here regularly, bringing visitors from all over the globe.  Gibraltar has become a popular holiday and business travel destination over the years and has the added bonus of tax-free shopping.

How do you fancy spending a day in Africa? Coach excursions to Tangiers are very popular with tourists to the Costa del Sol, and pick-ups by coach from Marbella centre are usually around 6.30am. Situated at the crossroads of Africa and Europe, Tangiers is a fascinating city. Ferries travelling between Algeciras and Tangier, or Algeciras and Ceuta, take between 30 minutes and 90 minutes, depending on which sailing you take.  Algeciras is just a one hour drive from Marbella.

Tangiers is one of the oldest cities in Morocco and was occupied by the Arabs and invaded by Vandals and Visigoths, before the Spanish and the Portuguese controlled the town.  The beaches of Tangier are an oasis outside of the city, with golden sand and sparkling blue waters.

The Grand Mosque of Tangiers is also well worth a visit!

Properties for sale in Marbella

Properties for sale in Marbella include townhouses, villas and apartments which offer excellent rental potential.